SHOW TIME FOR TOBACCO
The Southern Farm Show takes place in Raleigh, N.C., this week, and perhaps we will learn there whether there will be enough curing barns to go around this season. Manufacturers will be at the show looking for orders. "We have already received a number of them and can handle more," says Billy Price of World Tobacco Inc. "We would like to have all orders in by the end of February if we can, so we can be sure to deliver them to the farm no later than June 15. But we will accommodate later orders if we can." Price says his company is exhibiting this year for the first time with Evans MacTavish Agricraft of Wilson, N.C., which manufactures the barns for World Tobacco. The show takes place January 30, 31 and February 1 at the North Carolina state fairgrounds. For details and directions, go to the website http://www.southernshows.com. For a report on the show and on the growers meeting, watch for the next issue of TFN in early February.

The show will end with the Annual Meeting of the Tobacco Growers Association of North Carolina in the Holshouser Building on Friday, February 1. It starts at 10 a.m. and ends after a sponsored lunch...On the same day, the East Tennessee/Southwest Virginia/Western North Carolina Tobacco Expo will be held at the Appalachian Fairgrounds on Lakeview Street in Gray, Tn. Registration starts at 8 a.m. and activities conclude at 1 p.m., with GAP training available afterward (see below). For more information, call the Greene County Extension office at 423-798-1710... On February 5, the Tennessee --Kentucky Tobacco Expo is scheduled in Springfield, Tn., starting at 9 a.m. and running till 3 p.m. GAP training is available afterward (see below). The location is the Robertson County Fairgrounds Community Building 4635 Hwy. North in Springfield. For more information, call the Robertson County Extension office at 615-384-7936.

Bridging the GAP: Several Good Agricultural Practice meetings are scheduled soon. Find below the date and location of each meeting and the phone number to call to assure a place is available.

HOW MANY BARNS WILL BE ENOUGH?

The looming shortage of barns to cure the 2013 crop is especially urgent for flue-cured growers, who were very short on barn space in 2012 anyway and appear to be looking at more contract pounds. The age of the existing barns could make the problem worse. "A lot of our flue-cured barns are 20 to 25 years old," says Jay Boyette, commodity director for the North Carolina Farm Bureau. "At some point we will have to replace them. That time may have come. Even if it hasn't on individual farms, it is clear that as time marches on, this will become more of an issue." With the crop American flue-cured growers had last year and the prices it received, there will certainly be more demand for tobacco this year, and some new barns will have to be purchased. Boyette recommends you make any needed arrangements soon. "It's not like 15 years ago. Back then, a manufacturer might build barns on spec. Now, no one is going to build barns without a solid order, maybe even a guaranteed one. There is no readily available inventory of any tobacco equipment anywhere."

A new barn should be as heat efficient as possible, says David Reed, Virginia Extension tobacco specialist. Look for a unit that gives 11 to 12 pounds of cured leaf per gallon of fuel and is as well insulated as possible. And insulate the barn pad, he advises. The payback on that is very quick. Even if the crop was the same size as last year's, some new barns would be needed. "We don't have enough curing capacity now," says Reed. "Much of the 2012 flue-cured crop here was cured in October, mainly because the farmers didn't have enough barns to cure any faster." That is playing chicken with the average first frost date, October 15 in most of Virginia's flue-cured area.

There is no great demand among burley growers for new barn space, at least not yet, says Paul Denton, Kentucky-Tennessee Extension tobacco specialist. "Whatever enthusiasm growers felt about the prices for the 2012 crop have been tempered by the problems they faced in finding harvest labor." But if there turns out to be a need for new curing facilities later this year, Denton doesn't think it will be met with traditional tall barns. "I think that outdoor curing structures or low-profile barns would be better choices. You would want the lowest possible initial cost."

If more barn space is needed, burley farmers are more likely to seek unused existing barns than to build new ones, says Daniel Green, chief operating officer of the Burley Stabilization Corporation in Springfield, Tn. "It takes a lot to build a conventional barn, and although the outlook for burley is good, there is a lot of uncertainty in the short term." There are many unused barns remaining from the years when growers produced much more than they will in 2013. Unfortunately, they are frequently not in the areas where growers are expanding. 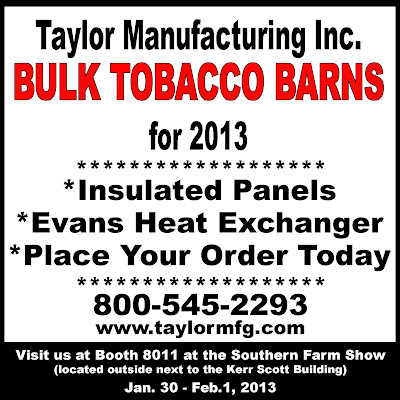 Editor's Note: The next issue of Tobacco Farmer Newsletter will cover tobacco machinery on display at the Southern Farm Show and other winter shows, plus details on the Tobacco Grower Association of North Carolina's annual meeting. Watch for it in late January. If you want more information about Tobacco Farmer Newsletter--or to share your thoughts--call me at 919-789-4631. Or send me an email at chrisbickers @gmail.com. Or use the comment apparatus on this blog. --Chris Bickers