Black shank rose up "with a vengeance" in Georgia and Florida in the last month, says J. Michael Moore, Extension tobacco specialist for the two states. "We are seeing it in some fields where we wouldn't expect it--fields with a good rotation and even some fields that hadn't had tobacco in years," says Moore. A good example: The Ben Smith farm in Coffee County, Ga., which Paul Bertrand, Georgia plant pathologist, said was struck by "the most aggressive black shank we have ever seen (see photo above). The field had been in pecan trees for the last half century, with pasture surrounding the trees. The trees were removed and what was believed to be the first tobacco crop ever grown in this field was planted in 2013. The second was planted in 2014, but it didn't last long. The damage was so bad that the farmer has disced it up since this picture was taken on June 11.

A further explanation of how to treat black shank in burley. Editor's Note--The following item appeared in a shorter form in the last issue of Tobacco Farmer Newsletter. Since then, I have received a corrected and extended version of the same piece from the original source, former Extension plant pathologist in Kentucky Kenny Seebold. Since it contains good additional information, I am going to run the amended version here. Apologies for the duplications: "Where black shank has been a problem in the past, consider making a pre-plant application of Ridomil Gold at a half pint per acre if applied in setter-water or one pint per acre if applied as a broadcast spray to soil. This would be the same as a half quart per acre of Ultra Flourish or four to six quarts of MetaStar. For light-to-moderate disease pressure, the first application of fungicide can be delayed one to two weeks after transplanting. For extended control of black shank, make a supplemental fungicide application (one pint of Ridomil, one quart of Ultra Flourish, or two quarts of MetaStar) at layby or at first cultivation and again at layby. Sprays made after transplanting should be directed toward the soil and incorporated immediately by cultivation or irrigation. An inch or two of rain will also incorporate these products. Best results are generally obtained when resistant varieties are planted."


Price outlook holding: Unless flue-cured acreage is up much more than expected or unless the growing season is poor, the price for the current flue-cured crop should remain strong, says N.C. Extension economist Blake Brown. But it probably not as strong as in 2013, when the average price was estimated by USDA at $2.115 a pound. The March Planting Intentions report projected 232,000 acres, up 3,500 acres from the 228,800 acre 2013 crop. Based on past experience, that may be a low projection. "In previous years, planting intentions were as much as 10,000 acres below the actual crop acreage for the year in question," says Brown. But the supply of transplants may not have been adequate to support a much larger crop.
The plant shortage never materialized in Kentucky. "Even now, from what I am hearing, you can still find plants available if you need them," says Bob Pearce, Kentucky Extension tobacco specialist. But not many do--85 percent or perhaps 90 percent of the state's burley has been seeded already. The crop has gotten off to a good start, but because of cloudy days, there has been some early blooming. "I think we might see some more," Pearce says.

There was definitely a shortage of plants in Georgia and Florida. "We saw quite a scramble at the end," says Moore. "All ours were set, and the last plants that went in were from North Carolina. But I think nearly everybody was able to plant the acres they wanted to." He makes a very rough estimate of 15,000 acres planted in Georgia and 1,500 acres in Florida. The crop started out about two weeks behind in both states but has caught up by at least half a week. He expects harvest to begin in 2 ½ weeks.

Planting in the N.C. Piedmont appears complete. "I don't know anyone who is not done planting," says Dennis White, owner of the Old Belt Tobacco Sales auction warehouse in Rural Hall, N.C. "There weren't many plants to spare but everyone was able to plant the acres they wanted." So far, the tobacco looks good, he says. Some of it was laid by last week.

Spotted wilt infestations are much higher in Georgia and Florida than predicted considering the cold winter. Says Moore, "It defies logic to have so much TSWV after such cold weather. I would place the average infestation now at 15 to 20 percent of the plants." That is not the worst incidence of spotted wilt Type 14 tobacco has ever had. "But it certainly was a surprise," says Moore.

Position changes: Kenny Seebold (see earlier item) has left his longtime post as Kentucky Extension plant pathologist and is now working as product development manager for the fungicide line of Valent USA...Jeff Vice is now the tobacco specialist for the Burley Tobacco Growers Cooperative Association. He will be responsible for grading and purchasing of burley with the goal of increasing the amount of tobacco purchased and expanding marketing to the trade. Vice is definitely an old hand in the leaf business--he has 38 years experience, starting with Universal Leaf and later with Philip Morris USA/Altria.

If you are hand weeding tobacco, pull the weeds from the soil before set occurs, says Matthew Vann, N.C. Extension tobacco specialist. "Once weed seed develop, you can actually spread them by hand removal." He also recommends that once you pull the weeds, you remove them from the field. "In rare situations, weeds such as grass and amaranth species have been known to 're-root' when left on the soil surface," he says. 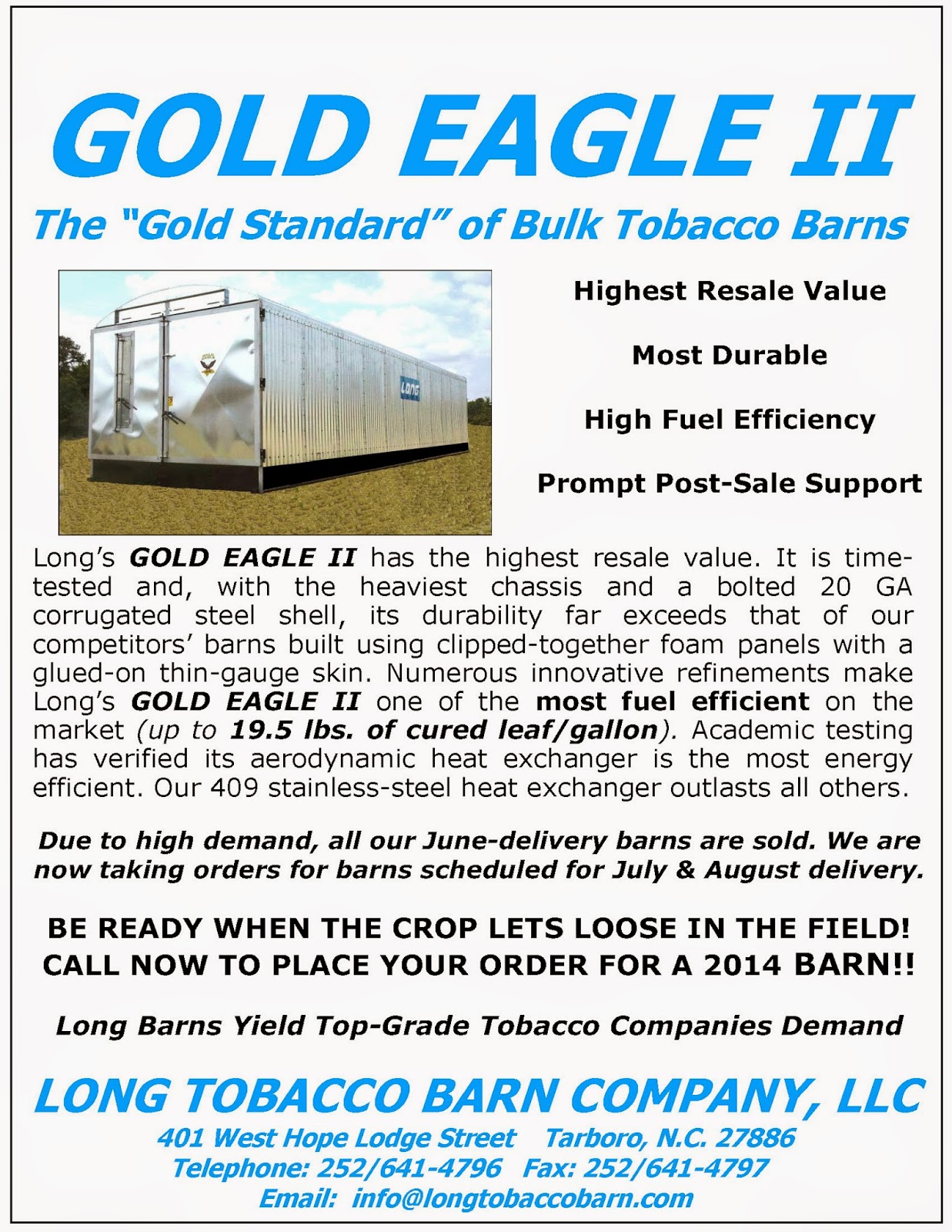 BIG M TOBACCO WAREHOUSE
1723 Goldsboro St. SW, Wilson, N.C.,
in the old Liberty Warehouse
We will hold both sealed bid auctions
and live auctions.
We promise
HONEST AND TRUSTWORTHY
SERVICE
For more information, contact Mann Mullen at 919-496-9033
or the warehouse switchboard at 252-206-1447.
Email: shrimpmann@embarqmail.com.
Posted by Chris Bickers at 6/18/2014 12:35:00 AM 2 comments:

BLACK SHANK BUSTS OUT IN GEORGIA, THRIPS IN N.C.