THE OUTLOOK FOR TOBACCO IN 2014

Agricultural economists Will Snell of the University of Kentucky and Blake Brown of North Carolina State University recently issued their report on tobacco and its outlook for 2014. The following segment is derived directly from that report but edited some for concision.

Lower yields, high quality. Yields were much lower than expected due to a very wet growing season. USDA forecast average yields 2,024 pounds per acre, down from 2,296 pounds per acre in 2012. But the quality of the crop is excellent (see photo), and record high prices are evidence of the short supply/high quality character of this flue-cured crop. The average price per pound may exceed $2.15.

Flue-cured production is estimated by USDA at 439 million pounds which would be down from the 473 million pounds produced in 2012 and down from early season expectations for nearly 500 million pounds of production for 2013. However, production and industry experts concur that actual crop size for 2013 is less than 439 million pounds.
The wet season caused some acreage to be abandoned, but most of the reduction in crop size was due to lower yields due to excessive rain. A weather-devastated 2011 crop, lack-luster Brazilian production and increased demand from China resulted in short global supplies of flavor style flue-cured. Harvested acreage for 2013 is forecast by USDA to be 216,000 acres, up from 206,000 acres in 2012. It was hoped that increased U.S. acreage for 2013 would alleviate the tight supply conditions.

Given a smaller U.S. flue-cured crop than expected, buyers will attempt to increase 2014 production in the southern hemisphere. Brazil's crop is planted, and the hopes there are for a 1.4-billion-pound crop for 2014. Universal Leaf Tobacco Company estimates the 2013 crop from Brazil at 1.34 billion pounds. Zimbabwe produced about 364 million pounds of good quality flue-cured in 2013. It sold for a reported average price of $1.67 per pound, up slightly from 2012.

What does this mean for contract prices? Should the very tight global supply situation be alleviated by larger, good-quality flue-cured crops in Brazil and Zimbabwe in 2014, then 2014 U.S. prices likely will fall back below $2 per pound. With very tight supplies and lower tobacco inventories held by many manufacturers, contract prices offered in early 2014 will be very sensitive to estimates of the crop size and quality of the southern hemisphere flavor-style producers. Given the continued declining demand for tobacco products in the U.S. and European Union, tobacco prices will also be very dependent on continued robust demand from China.

World supplies tight. The U.S. and global markets for burley are following trends similar to those displayed by the U.S. flue-cured market-tight supplies entering 2013, challenging growing conditions this year and expectations [which were disappointed] of a strong marketing season.
Tobacco buyers were hopeful that Americans would supply more burley in 2013 following a 25-percent-plus decline in world burley production. World burley production likely rebounded in 2013, but most of the growth occurred in lower quality/filler-style markets. U.S. burley contract volume and acres planted were likely up this year, but excessive summer rains in some areas destroyed acreage and will in all likelihood cause yields to be below average.

So how much was produced? USDA's most recent crop report forecast U.S. burley production in 2013 at 201.7 million pounds. That would be only two percent below last year's official crop size. However, many production specialists and industry officials believe this estimate to be optimistic, with a crop more likely in the 180- to 190-million pound range. Harvested U.S. burley acres are projected to be up 4,000 acres in Kentucky, but will be only 1,200 acres higher beltwide. Average burley yields across the belt are estimated by USDA at 1,966 pounds per acre versus last year's 2,021 pounds per acre.

Bottom line for burley? Global supplies of quality/full-flavor burley remain very tight as U.S. producers prepare for the upcoming 2013-2014 marketing season. Information not yet available on production in southern hemisphere producers like Malawi, Brazil and Argentina, but they will impact prices here.

Increasing sales of domestic snuff and foreign competition that is only limited have continued to benefit U.S. dark tobacco growers. U.S. snuff consumption has increased annually since the mid 1980s on the heels of new product introductions, successful marketing programs, restrictions on cigarette smoking and perceived lower health risks compared to combustible tobacco products. Domestic snuff sales were up 3.3 percent in 2012, with a four percent growth rate during the first half of 2013, slightly below growth of the past decade.

A noticeably larger 2013 crop may cause the industry to reevaluate additional acreage expansion in 2014, despite continued product sales growth. Nevertheless, the outlook for the U.S. dark tobacco growing sector remains very favorable given projected sales growth for smokeless tobacco products in the United States.
Watch for more excerpts from this report in future issues.

In other tobacco news:

Preview of the burley market? Farmers Warehouse of Danville, Ky., is shooting to open on the 23d, and I expect the others to open about that time.  How will they perform? We may have some indication from the Piedmont of North Carolina. I just heard from Dennis White, who operates the Old Belt warehouse in Rural Hall, N.C. (near Winston-Salem). He said 30,000 pounds of burley were brought to his warehouse for sale on October 8. "It all sold very well with cutters bringing $2.08, leaf $2.12 and tips $2.14," he said. "The buyers were Vaughan and Baileys. I will have a lot more on October 22. There have been a lot of calls."

How much nitrogen was too much? It was hard to say this year. I had a a chance to talk to N.C. agriculture commissioner Steve Troxler Monday at the press conference announcing the state fair opening (which takes place Friday). Troxler grows flue-cured and said that in September, he had a decision to make about whether to apply supplemental nitrogen. It wasn't difficult. "I knew I would be harvesting well into October, and I knew I needed to apply additional nitrogen to hold the leaf on the stalk that long," he said. Looking ahead to next year, Troxler said, "There is enough demand worldwide for our tobacco that we could increase our acreage next year. But we need the barn space to cure it."
Posted by Chris Bickers at 10/22/2013 07:06:00 PM 3 comments:

How much have tobacco farmers produced? That was still a question mark as flue-cured growers began to bring in the last of the crop and burley growers began to think about deliveries. Usually by this time of the season I can get a consensus of opinion on production from informed sources, but not this year. Let me provide three opinions for now:
There should be enough U.S. tobacco to meet at least the minimum requirements of operation for cigarette manufacturers, who after all have considerable experience with short American crops (see comments by Kirk Wayne below). But there seems to be no large supply of uncommitted "flavor" flue-cured or burley anywhere in the world at this time, so we can expect vigorous buying right up to the last delivery by anyone who needs U.S. leaf. Brazil and Zimbabwe will sell out--if they haven't already--of any flavor tobacco they have, as will probably Zambia and Argentina. Manufacturers may contract for more from Brazil's next crop, which will begin arriving at market at the beginning of next year. So my feeling is that the manufacturers will lean on their inventories, pick up a few extra pounds from our competitors, and see if the Americans can't bounce back in 2014. All this suggests to me that manufacturers will be hungry when contracting for our 2014 crop starts, and a good price seems a certainty.

The growing season is definitely not over. Much of the Burley Belt and the flue-cured Old Belt (Virginia and western North Carolina) still have a way to go before harvest ends. By all accounts, the Old Belt has a good top crop and may make up for some of the lightness in the East. In the Bluegrass of Kentucky, about 30 percent of the crop has not been harvested, a lot for this time of year. An early frost in any of those areas could be a real problem. Good news: Curing weather in the Bluegrass has been very good with heavy dews and fogs but not much rain. Good quality is likely.

The Eastern N.C. crop was bright: China bright, said one leaf dealer at the auction in Wilson last week. American flue-cured growers may have unintentionally produced a crop that has more appeal than usual to Chinese buyers. Because of the precipitation and interruption of nitrogen delivery, an unusual proportion of the U.S. crop is a lemony style that the Chinese will probably like. In that market, the sign of quality in a cigarette is golden yellow tobacco visible from the end.

Whatever we produce, the world cigarette industry may not be seriously affected by our shortfall. "Most manufacturers are aware that there can be shifts in availability of leaf in any country and any year," says Kirk Wayne, president of Tobacco Associates. "It is never entirely unanticipated. It gives them some concerns but most are prepared to accommodate this situation." Wayne, by the way, is cheered by the good quality of this year's crop. "That will help our exports even if we do come up short."

Were there enough new curing barns? By my very rough count, based on conversations with barn manufacturers, it appears that perhaps 400 new flue barns were sold for use during the 2013 season. I think the vendors were Long, World Tobacco, Carolina Tobacco Services, Taylor and Tytun, although I am not sure all made sales in 2013.

More barns will be needed next year. "It is common knowledge that the current U.S. bulk-tobacco curing barn inventory includes many old wood-frame barns that are deteriorated," says Bob Pope, general manager of Long Tobacco Barn Company LLC. "Though still functioning, they lack reliability and are expensive to operate and maintain." Pope says his firm's research indicates that about 19,200 barns may have been used in 2013, and that at least half of them will require replacement in the near future.

The demand is definitely being felt by manufacturers. Ron Taylor of Taylor Mfg. in Elizabethton, N.C., says he is already taking orders for delivery next season. "Farmers are gaining confidence in their ability to produce a crop that has some demand." Eric Scaion, president of World Tobacco in Wilson, N.C., says his company sold approximately 100 flue-cured barns in 2013. "At this time, we are making plans to double our barn sales for 2014. We have already begun producing barns for 2014, and are building two a day."

Good market for mechanical harvesters too. Tom Pharr of MarCo Manufacturing, Bennettsville, S.C. His company sells the Powell 6360 multipass unit. "We had good success with it this season," he says. There was also some interest in the company's Powell Burley Harvester. "We sold two, which is good," Pharr says. Both went to farms in Kentucky.

Transplanter technology improving: With the Trium transplanter made by the Italian company Checchi & Magli (C&M), you might get by with just one man walking behind your transplanter instead of three or four. The Trium also features ease in making the adjustments needed when you're changing soil conditions and/or plant size, says Mark Jones of Benchmark Buildings and Irrigation of Murfreesboro, N.C. It also has a unique "double kick" design that sets the plant straight up. 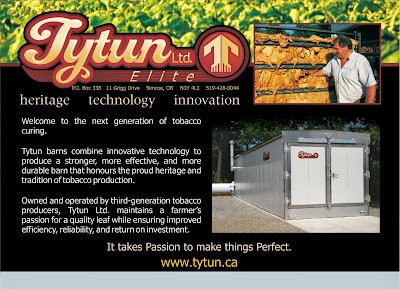 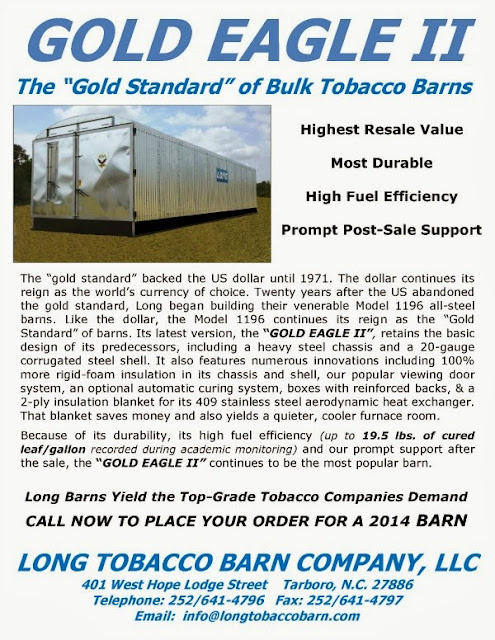 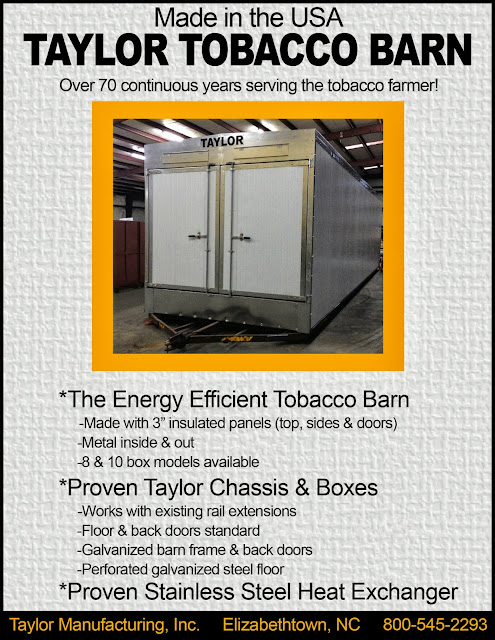