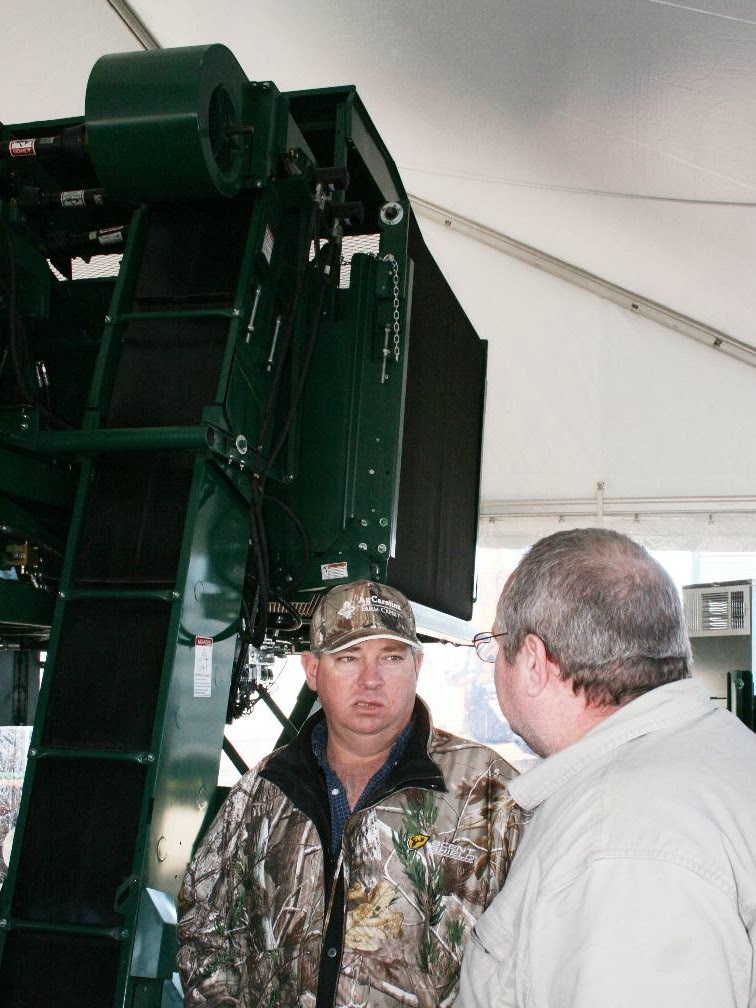 Time is running out, but the demand for new flue-curing barns continues strong. Dale Hutchins of Carolina Tobacco Services, Bennettsville, S.C., tells Tobacco Farmer Newsletter that he is still building barns, harvesters and other equipment. For barns, the point has already passed where delivery can be guaranteed by July, which is the normal delivery time. But Hutchins expects some orders for late delivery, and he will build some for future sales. "You can't sell them if you don't have them," he says. In the photo, Marty Adams (left) of Knightdale, N.C., got the word on mechanical harvesters from Hutchins at the recent Southern Farm Show.

BURLEY--In Kentucky, Extension tobacco specialist Bob Pearce expects a small increase in burley acreage, perhaps five percent. "Some limited planting is going on," he says. "Normally we would be a little farther on. I would say most of the crop is a week or 10 days behind." As soon as it dries out, planting will get going in full force, he says, and the crop could catch up quickly... In Tennessee, an earlier Extension projection placed plantings at close to last year's level, although the USDA thinks plantings will be down 12 percent in the state.

DARK--In Tennessee and Kentucky, any increase in acreage could be slight, says Andy Bailey, Extension dark tobacco specialist for both states. Planting of fire-cured and dark air-cured has barely begun. "It usually starts up around May 1, but because of the wet weather, full-scale planting probably won't get going until the end of this week," he says...In Virginia, transplanting of the small fire-cured crop was 19 percent complete by May 5, according to USDA.

FLUE-CURED--In Georgia and Florida, it appears that acreage increased a little, but tobacco plantings will be nowhere near fencerow to fencerow. "We expected a 10 percent to 15 percent increase, and that appears to be about right," says J. Michael Moore, Extension tobacco specialist. Planting was complete in Florida and nearly complete in Georgia at the beginning of May. "There is actually some tobacco in Florida that is ready for layby already," says Moore...In South Carolina, there will also be a modest increase in acres, says Dewitt Gooden, S.C. Extension tobacco specialist. But he doesn't have a good estimate yet. "We are a little behind in plantings, and we still lack a little of being finished," he says. "But I think all our farmers will get the acreage planted that they wanted"...In North Carolina, flue-cured growers in the East aren't much behind normal. "But they are behind where they would like to be," says Loren Fisher, Extension tobacco specialist. "Our larger growers may be farther behind than smaller ones." Fisher thinks flue-cured plantings in all of N.C. might reach 175,000 acres, although 160,000 acres--about the same as last season--may be closer to the mark...In Virginia, growers worked through Sunday trying to beat the rain predicted this week, says Lunenburg County Extension agent Lindy Tucker. Transplanting there had just begun this week. USDA estimated that through May 5, 12 percent of the Virginia flue-cured crop had been planted.

A substantial amount of GF 318--the still-new flue-cured variety developed by Gwynn Farms and marketed by GoldLeaf Seed--was planted in Georgia and Florida this year. It is comparable to NC 196 but it has mosaic resistance and is seven to 10 days earlier in maturity, says Moore. "Plant it early and it can help fill your barns until the rest of the crop ripens."

A way to save on natural gas? There could be substantial savings in the rate farmers pay for natural gas, says Larry Phipps, a certified utility broker for Options Utility Consulting. "In many cases, the current rates set by utilities do not reflect the lowest possible price," he says. "But we are able to bring competitive pricing that gives farmers the best possible rate." N.C. regulations limit the opportunity to large volume users. "But the savings can be considerable, and other states permit the rate savings for smaller farms." You can get a free audit by calling Phipps at 919 696 4228 or by email at Larry@UtilSav.com.

New grower leader: The Burley Tobacco Growers Cooperative Association in Lexington, Ky., appointed Steve Pratt general manager in April. He had worked 17 years with the Kentucky Farm Service Agency and earlier for 18 years with the Farmers Home Administration. He replaces Brian Furnish, now owner of International Tobacco Trading Group. "This selection was a long time in coming, but I feel we have made a good selection," said Pat Raines, president of the cooperative. "I am proud to have a person in the office with the experience that Steve has working with the farmers and office staff." Pratt says he is committed to expanding overseas sales for his members. "Our goal is to increase the amount of burley tobacco we produce that meets the demands of the market." He also hopes to increase the number of contracts the cooperative signs.

Another vacancy among tobacco specialists: Scott Bissette, who held the position of tobacco marketing specialist for the N.C. Department of Agriculture, has been named to oversee the N.C. Forest Service. A new specialist will be appointed, but a schedule for choosing that person has not been set. The duties of the position may be revised, sources say.
DATES TO REMEMBER