WILL THE BURLEY CROP MAKE IT INTO THE BARN BEFORE FROST?

A migrant harvest crew from Latin America hand picks flue-cured leaf on a farm near Raleigh, N.C., in this file photo by Chris Bickers.

An early frost in Kentucky could find much of the burley crop unharvested, says. grower-warehouseman Jerry Rankin of Danville, Ky. He has looked around at the progress of harvest and added up the number of workers available to finish the job--and he is concerned. "It's not so much that the crop is late, although some of it is. It is that we are behind in getting it cut and to the barn. Labor is too short to make up that difference before October 2, when we expect to get our first frost."


The labor crunch is also being felt in Tennessee and southwest Virginia, says Don Fowlkes, manager, agronomy, Burley Stabilization Corporation (BSC). "I think we will get this crop harvested and barned. But it would help if H2A arrivals were more dependable. There is little local labor and the productivity is reduced."


It seems likely that at least some of this Tennessee burley crop is not going to stay in the field long enough to achieve maximum yield. "Our farmers are not going to be able to wait," says Fowlkes. "It is a late crop, and they will have to harvest it a little early to get it all in before first frost." Normally, you like to leave tobacco in the field four to five weeks after topping. "But they might (but hopefully won't) have to cut some of this crop in three weeks or less," he says. Be prepared to close up your barn if it needs it, Fowlkes says. "With late hung tobacco, there is more risk of freeze damage," says Fowlkes. "And there is more risk of green color from cold winds. You want to be able to close the barn."


Burley prospects better: While the long-term outlook remains uncertain, the burley market is definitely in a more balanced position than it was at this time last year, says Daniel Green, chief operating officer, BSC. "The 2017 USA burley crop will likely end up in the range of 150-160 million pounds or just over 13.5 percent of total world production. It appears that world production of burley should total just over 1.1 billion pounds for 2017, more than 15 percent less than 2016." Based on current cigarette production, approximately 1.2 billion pounds of burley are currently needed worldwide to satisfy demand, resulting in a slight, short-term shortage. "African volumes will rebound quickly and any shortage that results in increased sales of flavor burley should be satisfied by the end of 2018."


Blown away? When the rain and wind of Hurricane Irma reached south Georgia on Sunday, perhaps 30 percent of the crop was still in the field, says J. Michael Moore, Extension tobacco specialist. By the time it passed through, maybe half had been blown down or had its leaves blown off or otherwise been rendered unsalvageable. And Moore wasn't too optimistic about what survived. "The leaves were beaten by the strong winds and that may cause them to mature so rapidly that farmers won't be able to pick them before they deteriorate. So it could be that very little of the remaining Georgia crop will make it to the buyer.


Florida was luckier. All of its tobacco was out of the field when the storm arrived, although some was still in the barn, says Moore.

Power outages as a result of the hurricane were the stuff of worldwide news reports. Loss of quality in barns that lost power were a serious threat to the tobacco in them, but many Georgia growers forestalled that problem by obtaining emergency generators of one type or another before the power went out, says Moore.

Diseases in the East: In eastern North Carolina, much of the upperstalk tobacco in the field is getting hammered by black rot, says Roy Thagard, Greene County Extension agent. Other diseases such as black shank and Granville wilt also continue to progress. "There is a fear that tobacco farmers will get poor grades for their tobacco going forward," Thagard says...In the Pied-mont, growers are harvesting tobacco as quick as barn space will allow, says Charles Mitchell, Franklin County, N.C., Extension agent. "We have seen an enormous amount of Granville wilt this year with some black shank as well." But there was one bit of good fortune: "We dodged a bullet when Hurricane Irma shifted westward," Mitchell says...In the mountains of western N.C., harvest of burley is nearly complete in Yancey County, says Stanley Holloway, County Extension agent... The season's first frost--a patchy one in some low-lying areas--took place on September 8 in Watauga County, in the N.C. mountains. 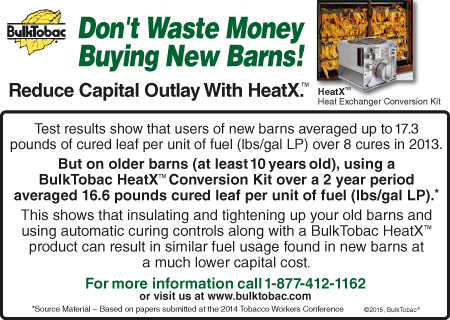