BAD NEWS FOR BRIGHT GROWERS: IT IS GETTING REALLY DRY! 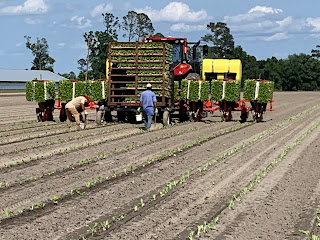 Transplanting flue-cured on the farm of Daniel
Johnson in Pierce County, Ga. earlier this spring.

GEORGIA-FLORIDA: The crop was beautiful till the Saturday before last. “Then the rains started falling,” says J. Michael Moore, Georgia Extension tobacco specialist. “Many fields got two to 10 inches. Washing and pooling was sometimes a problem, and there were instances of hail damage too.” Moore estimated 99 percent of the crop was planted by May 1. “We did have to do a little replanting, but were able to find adequate plants,” said Moore. “[Now], there are very few plants left in Georgia. I don’t think there are 100 trays of plants left in the state" “After a week of drying conditions, cultivation and fertilization, the crop looks great again”…Florida planters finished transplanting several weeks ago. Growers there received no rain from the April 24 weather front. The crop looks good.
NORTH CAROLINA: The N.C. Coastal Plain is close to 50 percent planted, said Matthew Vann, N.C. Extension tobacco specialist, on April 30. “We’re just kicking off the show in the Piedmont, so plantings have to be less than five percent there. We are in dire need of rain. To be frank, I can’t recall a time in my career when soil moisture conditions were so deficient this early.” Between the return to warm daytime temperatures, low humidity, and a lot of wind, the seedlings are struggling to recover from transplant shock. “My best hope is that we can get a good soaking rain of about an inch or so in the Coastal Plain fairly soon.” VIRGINIA: How much tobacco has been transplanted in the Old Dominion? According to the National Agricultural Statistics Service, two percent of the burley, one percent of the dark fire-cured, and five percent of the flue-cured had been transplanted as of May 2.
SOUTH CAROLINA: Transplanting of tobacco has all but stopped due to low soil moisture., said NASS on May 2. Only 67 percent had reportedly been transplanted by that date.
KENTUCKY: None of the tobacco in the Black Patch had been set as of Friday, but setting should begin soon. May 1 is usually the target date. “It’s been dry so far this spring, dryer than several years,” says Andy Bailey, Kentucky-Tennessee Extension dark specialist. “Plants look good and there appear to be a good supply”…There are several relatively new tobacco types going into this region this year. The leading one is Connecticut broadleaf: About 3,000 acres was grown here last year. It will be grown again. But plantings will be lower this year, perhaps 1,000 to 1,500 acres. Also, there is a small acreage of a few hundred acres of PA 41 seedleaf. And finally, there is an influx of Southern Maryland tobacco, says Bailey. “We have quite a few Amish farmers relocating here from Pennsylvania here who may be accounting for the Maryland plantings.”
TENNESSEE: In spite of changes made in the 2021 Crop Insurance regulation, most of the dark and burley tobacco farmers in Tennessee and in neighboring areas of Kentucky near Nashville are still growing tobacco, says Bob Dudney, TFN correspondent stationed in Gallatin, Tn. “Burley producers appear to be all under contract with manufacturers and processors through the beginning of May, and dark air-cured and fire-cured are virtually all under contract.” Some burley growers in the area left tobacco altogether this season, contributing to reduced expected acreage. “Few dark tobacco producers appear to have left this year, and acreage is expected to remain about the same,” he says. “No producers are known to have switched from burley to dark tobacco.”
CANADA: In Southern Ontario, the greenhouse season is progressing well, despite the cool and cloudy start, according to the Canadian Tobacco Research Foundation. Overall, percent seed germination and uniformity of seedling stands in most greenhouses appear to be quite good. In some greenhouses, clipping has started already.
Welcome to the May I, 2021, issue of Tobacco Farmer Newsletter. If you haven't signed on to receive the newsletter regularly, please email your subscription request to TFN at chrisbickers@gmail.com. Include phone number and your affiliation with tobacco, such as farmer, buyer, dealer or Extension agent. 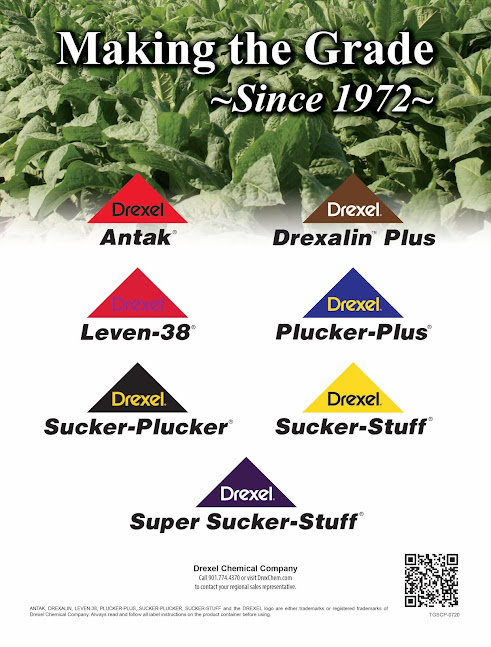