There won't be any scenes like this at the N.C. State Fair Grounds on Feb. 3-5. That's because the 2021 Southern Farm Show--scheduled for those dates--has been cancelled. (Photo taken at the 2020 show by Chris Bickers.) ﻿
Another farm event went down to the Pandemic when the Southern Farm Show for 2021 was canceled because of difficulties complying with COVID regulations. I am going to fill the information gap the cancellation has created by devoting much of the January III issue to reporting on new tobacco machinery, chemistry and any thing else that would have had a had a prominent part at the show fr tobacco farmers. So, manufacturers, if you have something that you think deserves to be brought to the farmers' attention, call me at 919 789 4631. You can include hemp machinery too if you have a good candidate.
Welcome to the December II, 2020, issue of Tobacco Farmer Newsletter. If you haven't signed on to receive the newsletter regularly, please email your subscription request to TFN at chrisbickers@gmail.com. Include phone number and your affiliation with tobacco, such as farmer, buyer, dealer or Extension agent.
What not to do if you are planting new flue-cured varieties: Don’t plant more than a few barns your first year, says Matthew Vann, N.C. Extension tobacco specialist, and don’t plant highly resistant cultivars in the absence of recognized pesticide programs. “Don’t plant into fields that have not been tested for nematodes and treated where appropriate,” Vann says.
The still-new flue-cured variety NC 1226, which was available to farmers this past season, isn’t immune to black shank, but in tests, it has shown the highest level of black shank resistance across multiple locations. Yield was comparable to K 326.
Greenhouse season is about to commence in the Deep South, and J. Michael Moore, Georgia Extension tobacco specialist, advises going back to the basics. “Remember the disease that is the biggest problem in the greenhouse is tobacco mosaic virus,” he says. “Make sure everybody who goes into your greenhouse avoids spreading the disease from the tobacco products they use. And when you start clipping, remember that regularly using a 10 percent chlorine bleach solution to wash the mower will really reduce spread of TMV.”
Just as I close this issue, I’ve heard a reliable report that Altria will not accept contract deliveries of Georgia flue-cured at the warehouse it has used for many years in Nashville, Ga. Georgia growers can still seek contracts from Altria, but they will have to deliver to a warehouse in North Carolina. This will substantially increase grower costs of transportation and may discourage some from contracting with Altria. Note: I have not been able to confirm all this, so if any reader can provide further details, feel free to do so at the phone number above.
This is not the first time: An Altria delivery station in Kentucky was closed before the current season. Altria had been accepting deliveries for some time in Elizabethtown but withdrew from that location. Farmers who formerly delivered there are now redirected to Danville, Ky., which can mean an extra two hours in transportation time.
REPORT FROM OVERSEAS
A tariff on tobacco and sweet potatoes was announced by the European Union at the end of November. It plans to impose a 25 percent tariff. The effect will depend in part on how long tobacco companies think the tariff will remain in place, said Blake Brown, N.C. Extension economist.
A History of Burley Tobacco for the Coming Year 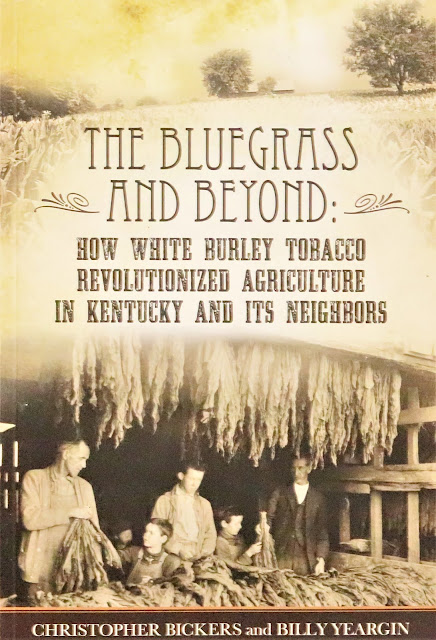 I am very happy to let you know that I have recently helped write a short history of burley in Kentucky and its neighboring states. I and my co-author Billy Yeargin, tobacco historian and faculty member at Duke University, named the book The Bluegrass and Beyond to signify that white burley first appeared in the Bluegrass but has moved well beyond that area since. The core of the book is an oral history section composed of interviews with 14 burley tobacco growers who have grown the crop long enough to have special insights on burley pro-duction. And Billy has updated his popular essay on the auction marketing system over the history of American tobacco and uses it to end the book. If you would like a copy, the price is $20, plus $8 shipping and handling for those delivered by the US Postal Service (alternate delivery methods can be discussed). To order, write to me--Chris Bickers--at 7413 Six Forks Rd., No. 126, Raleigh NC 27615. Questions? Call me at 919 789 4631 or email me at chrisbickers@gmail.com.
Posted by Chris Bickers at 12/20/2020 11:07:00 PM No comments:

MESSAGE FROM THE MARKET: THERE'S NOT ENOUGH BURLEY TO GO AROUND

FAST-PACED HARVEST SHOULD END BEFORE THE FIRST FROST

THE PROSPECTS FOR HEAT-NOT-BURN

A GOOD BURLEY CROP ON THE WAY