USDA has projected 14 percent more burley production and five per cent more flue-cured production in 2017 compared to last year based on its July grower survey. Even more impressive, the dark air-cured and fire-cured crops are projected to rise a whopping 59 and 40 percent over the weather-damaged 2016 crops for these types. Small increases were projected for the minor types Southern Maryland and Pennsylvania seedleaf. Following are the projected volumes by state and type including the percentage change since 2016.

Auctions begin: Big M Tobacco Warehouse and Horizon Ltd. Warehouse, both in Wilson, N.C., and both selling by sealed bids, kicked off flue-cured auctions for the year with sales on August 16. Kenneth Kelly, owner of Horizon Ltd., said that theofferings at his house, all downstalk, were limited. But it appeared to him that as of now, very good quality is coming out of the east, and the weight is average to slightly above average. "It is certainly sellable," he says. "Prices might be a little better than last year, but we will need to sell more to be sure of that." The buyers were a similar group of dealers and small manufacturers as in years past, he adds. Old Belt Tobacco Sales, in Rural Hall, N.C., which conducts live auctions, will hold its first sale on August 22.

Be sure to inspect burley barns well before housing, says Don Fowlkes, manager of agronomy for Burley Stabilization Corporation. "Tier poles should be structurally sound and safe," he says. "Make sure the ventilation doors work properly. Consider making ventilation doors or barns which don't have them, especially if the barn is located in a low area that doesn't get much air flow. And be sure that the roof doesn't leak."
Posted by Chris Bickers at 8/21/2017 04:28:00 PM No comments: 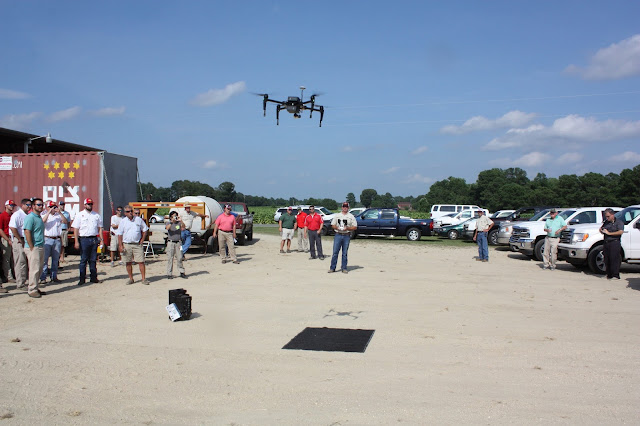 Looking to the sky: Farmer Brandon Batten demonstrated how he uses a
drone on his tobacco near Four Oaks, N.C., as part of the N.C. Tobacco Tour
on July 24. There is definitely a future for drones in tobacco production. says
N.C. Extension tobacco specialist Matthew Vann. "The first use might be as a harvesting
aid, to take some guess work out of deciding when to harvest," he says.