Will the strong demand of 2013 continue?

Buyers debate the value of flue-cured leaf at an auction in Wilson, N.C., last September.

It appears now that there is still an upward trend in demand. "But it is hard to predict how far into the future we will see it continue," said N.C. Extension economist Blake Brown at the N.C. Tobacco Day meeting in Smithfield on December 5. "In the near term, demand from China is very robust. They have been trying to increase their purchases of flue-cured tobacco, [not only] in the U.S. but also in other countries. That upward trend has more than offset declines in consumption in the U.S. and other developed countries."

Prospects for 2014? Brown noted that some companies had already begun signing contracts as of December 5. "That is good news for farmers," said Brown. "It indicates that they haven't been able to solve supply problems with the South American crop." But just this week,Tobacco Farmer Newsletter learned that some companies have slowed down on contracting or have reduced the price. One auction company owner said he fears that some of the 2013 crop may have been sold at a price that just doesn't fit into the Chinese market, and the companies will have to solve that problem before proceeding much farther.

Why 2013 was no windfall for farmers: The yield of the last flue-cured crop was about 2,000 pounds per acre, well below the normal 2,300 to 2,400 pounds per acre. "That is quite a large loss," said Brown. "Farmers also had to spend more money putting nitrogen on to try to compensate for the rain."

Technology could change everything: All of the major cigarette manufacturers in the U.S. and Europe have either purchased an e-cigarette company or are developing their own e- product. "We will just have to see how the technology advances, but it's one factor that could really impact the cigarette market in the future as more and more smokers switch to those kinds of products," said Brown. There seems little reason to think that that the e-cigarette industry, no matter how big, will use much American tobacco.

After all these years, the flue-cured producers of North Carolina will finally get the chance to vote on whether or not they want a checkoff to fund their growers association. A referendum was recently authorized by the state legislature, and the Tobacco Growers Association of N.C. hopes to hold it sometime in the spring. It will be conducted by mail. TGANC will mail ballots to all active growers it has addresses for, and you can also get a ballot at any GAP meeting or from your county Extension office (and if you still can't get one, call me and I will get one for you). A two thirds vote is needed to pass. Ten cents per hundredweight is proposed, which I am told comes out to about $2.30 an acre and would generate perhaps $300,000 a year in operating income. My editorial opinion: Every N.C. grower should vote for this, to give leaders the stability of support they need to effectively represent them. I was one of the first members of this organization back in 1981, and I was very involved in the effort to obtain a checkoff in 1989. That effort was turned back because the non-producing allotment owners-a powerful group back then-thought it would dilute their influence. Fortunately, the concept of non-producing allotment owner disappeared with the buyout, and I can't think of anyone else who would now oppose such a positive and constructive move. Vote yes!

Endowing an Extension post: An effort has begun to create an endowed chair of tobacco Extension at North Carolina State University in the name of W.K. (Bill) Collins, longtime tobacco agronomist. But funding will be a challenge, and details are still being worked out.

A terrific gift for tobacco-oriented individuals. Price is $21.99. Also available: A companion work called "Remembering North Carolina Tobacco," also by Yeargin. Price is $19.99. To order, specify which or both books you want and send check or money order to Yeargin at 112 N. Webb St, Selma NC 27576.

North Carolina and Virginia have announced their re-certification meeting schedule for flue-cured tobacco in the new year. Dates and locations follow. Pre-registration by phone is required. Call the number listed for the meeting you want to attend. Burley meetings in N.C. and burley and dark meetings in Virginia will be announced later. Look for listings from other states as they are available.

Is burley production headed up? The farmer cooperatives seem to think so. The Kentucky-based burley cooperative plans an increase in purchases for 2014. "Our goal is to increase the volume we have under contract for 2014," says Steve Pratt, general manager, Burley Tobacco Growers Cooperative Association (BTGCA) in Lexington, Ky. "This is definitely the direction we want to go in." The Tennessee-based burley cooperative will likely seek more tobacco too, as it responds to a world market for flavor burley that has been very strong for several years, says Daniel Green, chief executive officer of Burley Stabilization Corporation. "We want to buy more tobacco if we can get it grown, and we expect to be competitive in price."

The geographical service area for the Tennessee burley cooperative has grown in recent years. In addition to its traditional states of Tennessee, North Carolina and Virginia, it also has growers in Kentucky, Ohio, Indiana, Missouri and Wisconsin. But if the cooperative seeks to increase production in 2014, it will probably be through existing farmers rather than new ones, says Green.

New delivery stations: To handle the larger crop that was expected expected in 2013, the U.S. Tobacco Cooperative (USTC) opened new marketing centers in Smithfield, N.C., and Oxford, N.C. Four were already operating in Nashville, Ga.; Mullins, S.C.; Wilson, N.C., and Danville, Va. All six will be in operation again in 2014, says Tommy Bunn, USTC president. BSC is contemplating opening another delivery station, probably in Kentucky. "As it stands now, some of our growers have to drive quite a way to get to our facilities in Springfield and Greeneville, Tn.," says Green.

It was a good year for the flue-cured cooperative. USTC paid its members the highest patronage dividend in its history: $.245 per delivered pound. That was 88 percent higher than the previous year. Dividends are paid on the basis of the fiscal year. "This indicates that we had an excellent crop and that the cooperative was able to sell it for a profit," says Bunn. "Another factor was that our consumer products--cigarettes, small cigars and cut tobacco--also did well this year." But Bunn says the flue-cured cooperative hasn't yet made a decision on expansion.

A chance for good answers to tough production questions appears on tap at the North Carolina Tobacco Day program this Thursday (December 5) from 8 a.m. till 12 p.m. at the Johnston County Extension Center in Smithfield, NC. Among the topics: How to achieve MSPA and H-2A compliance; what is the assessment of energy use in new curing barns; are rotations available that will reduce Palmer amaranth; what competition can we expect from e-cigarettes; and several others, concluding with N.C. Extension economist Blake Brown's take on the tobacco outlook for 2014.

The birth of a new burley area: Since deregulation, a small but significant growth of burley has sprung up in Wisconsin. "Most of the growers are Amish," says Green. "They do well. They are looking to grow more." According to another report, about 20 Wisconsin growers experimented with Southern Maryland this year.

How to control Palmer's amaranth: It's a more important concern now since China complained earlier in the year that seed of this weed, along with crabgrass, foxtail and some others it doesn't like. Spartan could be the ace in the hole since it gives very good control. Aim and Prowl are also effective. Judicious cultivation also helps, and if you get your top and sucker crew to pull them up by hand, that increases the control. The Cadillac treatment is deep tillage with a moldboard plow which can reduce pigweed by about 50 percent, says Vann. Combine it with Spartan and you can get as much as an 80 percent reduction. But deep tillage is expensive, maybe $33 an acre more compared to shallow tillage, says Vann. The best way to keep Palmer's amaranth seed out of tobacco is not to plant it tobacco in infested fields in the first place. What tobacco is most vulnerable to Palmer's seed contamination? Flue-cured that is mechanically harvested, says Vann. Note: Vann will address this topic further at N.C. Tobacco Day.

A report on tobacco in Pennsylvania: The 2013 crop in the Keystone State could end up being a good one. "The first half of the season was wet, beginning at transplanting," a leaf dealer in Lancaster told Tobacco Farmer Newsletter. "That pushed the crop back two weeks, but that wasn't a problem. Once the rainy period stopped, we had spotty rains here and there, which helped. When the tobacco got in the barns, it cured a little quick, but that didn't end up being a problem either." Industry estimates of production are: Pennsylvania seedleaf (Type 41), 3.7 million pounds. Southern Maryland (Type 32), 6.5 million pounds, down two million pounds from 2012. Burley, 13 million pounds, up perhaps a million pounds over last year.

Mark your calendar--Southern Farm Show, February 5, 6 and 7, N.C. Fairgrounds, Raleigh, N.C., including the annual meeting of the Tobacco Growers Association of North Carolina, 10 a.m. to 1 p.m., on Friday, February 7.

A request from the editor to Extension specialists and anyone else holding GAP meetings: Please send me the dates and places and I will publicize in future issues.--Chris Bickers 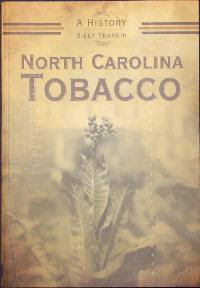 Written by historian Billy Yeargin, this softcover book from History Press recounts the Bright Leaf's contribution to Tar Heel history. A terrific gift for tobacco-oriented individuals. Price is $21.99. Also available: A companion work called "Remembering North Carolina Tobacco," also by Yeargin. Price is $19.99. To order, specify which or both books you want and send check or money order to Yeargin at 112 N. Webb St, Selma NC 27576. For more information, email him at tobhistry@aol.com.

We will hold both sealed bid auctions
and live auctions.
We promise