A PROGRESS REPORT ON THE 2016 TOBACCO CROP

Georgia and Florida--Planting is complete, says Extension tobacco specialist J. Michael Moore. "Some growers are making fertilizer applications, while the earliest transplanted fields have been plowed for the last time." There was an abundances of plants and many of them are still available for purchase. Moore expects 13,500 acres of tobacco in Georgia, which is the same as USDA's Prospective Plantings projection for the state. He expects about 1.300 acres in Florida, which wasn't included in the USDA Plantings report.

North Carolina--Planting is 75 percent complete in the Eastern Belt, 56 percent complete in the Middle Belt and 21 percent complete in the Old Belt, according to a county agent survey compiled by Matthew Vann, Extension tobacco specialist. The statewide estimate is 59 percent.Thanks to rainfall in most of the state, Vann doesn't expect much transplanting got done this week. "But once we get some dry weather, the farmers will get right back out there." There are still plenty of transplants available and they are generally of good quality, he says.

Virginia--Planting of flue-cured was only about five percent completed through May 1, according to USDA's Crop and Progress Report. The five-year average is 11 percent. Weather the past week prevented catching up but farmers weren't complaining. "Rain this week was helpful," says Extension agent Cynthia Gregg in Brunswick County. "Producers are planting tobacco and needed the rain."

Kentucky--Burley growers are waiting for fields to dry out, says Bob Pearce, Extension tobacco specialist. "Maybe a few have set some tobacco out already, but most are in await and see attitude with the weather." Thanks to up and down weather during the plant-producing season, it was a challenge to get a good crop of plants, but Pearce says what he has seen so far has been fair to good. It looks like the supply will be adequate but some growers may have to hunt around if they don't grow enough of their own.

Tennessee--Transplanting has just barely begun, says Eric Walker, Extension tobacco specialist. He knows of only a few producers in the state who have started setting tobacco. "We were all geared up to start setting, but then the rain we received over the weekend was enough to hold us back. Next week, it will be wide open."

In other tobacco news:

Blue mold has been found in several greenhouses in south Georgia since Easter, but it is not a significant problem in the field yet, says Moore. "Farmers aggressively treated
in their greenhouses and segregated the infected plants. We have found only one location where blue mold is active in the field." Hot weather in this area last week will hopefully have dried up any other blue mold in the field.

A little tomato spotted wilt has also been found in Georgia. Moore estimates one or two percent of plants have been infected. "That is not nearly as much as was expected after our relatively warm winter and spring," he says. There was no shortage either of weed hosts or of thrips, which vectors the disease.

GAP audits for cooperative growers: The U.S. Tobacco Cooperative (USTC), headquartered in Raleigh, N.C., will require GAP Connection audits for all of its growers this year. "While grower audits are time consuming, they are a key part of changing the perception of U.S. tobacco," says Stuart Thompson, chief executive officer of the cooperative, which serves flue-cured growers. "Leaf buyers not only want growers to meet high standards, they want data to prove it." Thompson thinks the market is heading toward 100 percent audit of growers on an annual basis...USTC has created a new position of director of leaf quality and appointed Declan Curran to fill it. Curran had been manager of processing and quality at Phillip Morris International previously.

More child labor allegations: Reynolds American (RAI) came under fire this week when the Farm Labor Organizing Committee (FLOC) contended that some of RAI's farmers violated the company's 2014 commitment not to allow the employment of children under 16 on farms it buys tobacco from. Further details will follow in a future issue.

In Passing: Layten Davis of Spring Creek, N.C., near Marshall, died April 30. A native of Madison County, he was a professor of agronomy at the University of Kentucky, later the director of the Tobacco and Health Research Institute in Lexington, Ky., and still later principal research scientist at R.J. Reynolds Tobacco Company. He was the co-editor in 1999 of Tobacco: Production, Chemistry and Technology, still an important reference book. 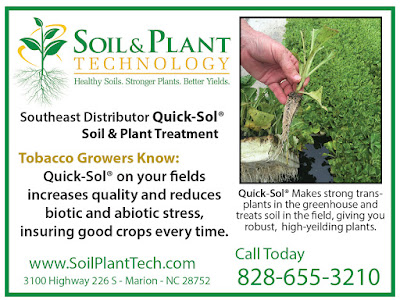