PROSPECTS DIMINISH FOR A PRICE-DEPRESSING SURPLUS

A lot of flue-cured is deteriorating on the stalk in Eastern North Carolina, says Matthew Vann, N.C. Extension tobacco specialist, who continues to think that the barn-busting crop predicted six weeks ago is unlikely to occur. "Some tobacco-growing areas in the East have gotten as much rain as last year at this time," he says. "It was hot one week this month and rainy the next, and now the crop is going back fast." Some growers are finishing harvest now. "Farmers are really putting the accelerator down, with emphasis on quality. I am seeing some pale color. I wouldn't expect much green leaf that won't cure, at least not in the East."

In the N.C. Piedmont, the situation is the exact opposite, says Vann. "There was a prolonged dry period and late-season uptake fertilizer. Now, growers are going to hard pressed to complete harvest before first frost." Tim Yarbrough, a farmer in Prospect Hill, N.C. (near Roxboro), says, "It will be very hard to get the last of this crop harvested and cured. It is not just the shortage of barns. Farmers will have a hard time getting into the field with enough machinery and labor to get the job done. There are just so many hours in the day."

In Virginia, Halifax County Extension agent Chris Brown says the flue-cured there is definitely late. "It is hard to put a finger on how much has been harvested, but it seems likely at this point that frost will nip some of what is left. If we have an early frost, we could have a big problem. Some farmers are not half way up the stalk yet." So far, the quality appears decent. Some stalk-cut tobacco is grown in Halifax County, he says, and most had been cut by mid-September. "Both the burley (45 acres) and dark fire cured (15 acres) look good," he says. "In fact, the dark looks real good."

In Kentucky, harvest was perhaps 60 percent done by the middle of this week. "We are way behind," says Bob Pearce, Kentucky Extension tobacco specialist. "We have had a problem with rain--it stays so wet that you can't do anything. There has been some hollow stalk rot and some leaf drop, and some farmers may not have all their tobacco cut before first frost." Labor has been an issue for some growers, he says. On the bright side, Pearce is optimistic about the quality.

In western N.C., dry weather has contributed to a relatively late burley crop. A shortage of labor has further delayed harvest. One farmer near Asheville had a field that was ready to cut before his labor crew arrived. So he used a tractor-mounted sickle mower to cut down the stalks two rows at a time. It took some experimentation to find the right speed, but the farmer says the results were good and cutting one acre took less than an hour. "There was some damage, but there would have been more if I'd let it go any longer." Still, he hopes the rest of his fields will hold till his crew arrives so he can cut conventionally.

How to save labor in burley harvest: At the Upper Piedmont Research Station at Reidsville, N.C., researchers use a Weedeater with a blade to cut the stalk as they walk backward down the row. "You can cut burley much faster with the Weedeater than with a tobacco knife, and you don't have to bend over to do it," says Joe French, superintendent at the station. "Breakage might be a concern, since the stalk falls straight down. But we haven't had enough breakage yet for it to be a problem." Besides the Weedeater, the station staff has increased its labor savings by notching the stalk and hanging it from wire rather than spearing it on sticks. For more information about this approach, you can call the station at 336 349 8347.

USDA September estimate of production
With percentage comparison to 2013

All eyes were on the flue-cured auctions when they began in late August. At this live auction at the Old Belt Warehouse in Rural Hall, N.C., on August 26, leaf sold for an average of $1.10 per pound.

Late-season rain lowers eastern North Carolina flue-cured prospects? Industry projections of production has declined steadily since a month ago. One of the more conservative estimates comes from Matthew Vann, N.C. Extension tobacco specialist, who tells Tobacco Farmer Newsletter he now thinks N.C. may produce 400 million pounds of flue-cured and the flue-cured belt as a whole might produce 500 million pounds or a little more. Vann's estimate is the lowest I've heard from my regular sources, but all are lower than they were a month ago...Why the reduced expectations? Heavy rain in Eastern N.C. "We probably lost 25 to 30 percent of our crop because of excessive water the last three weeks," said grower Allen Wooten of Pender County, N.C. His farm near Wilmington is quite close to the coast. In Pitt County, N.C., a little farther inland, excessive rainfall has reduced yield expectations from 2,400 pounds per acre to around 2,000 pounds (see TFN, August II issue). "Some areas of the Coastal Plain have had as much rain as last year," says Vann. 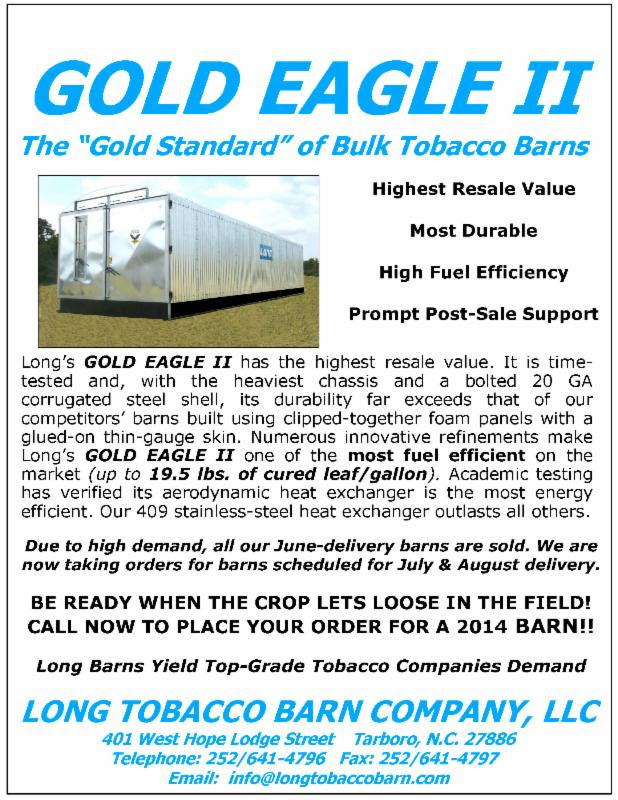 Running out of frost-free days? Eastern Belt farmers are facing the very real prospect of not finishing harvest before first frost. In Newton Grove in eastern N.C., Phil Hudson says the crop in his areas is running 10 to 14 days late. "It's Labor Day already and we have just started the second harvest in north Sampson County!" he says. In cen-tral N.C., Don Nicholson, N.C. Department of Agri-culture agronomist who works in Harnett, John-ston, Wake, Wayne and Wilson Counties, says, "The tobacco crop in some parts of the region looks very good in both yield and quality. However, some areas have had too much rain and the crop is fading quickly, putting a lot of pressure on curing space."

Some not yet primed in Old Belt: In the Winston-Salem, N.C., area, Vann says some of the flue-cured has yet to be primed the first time. That was what TFN found on a visit to Mark Smitherman's farm near Forbush, N.C. On August 26, he was stripping the last of the leaf from about a fourth of his tobacco. The rest hadn't been harvested at all. In East Bend, N.C., Harnett Extension agent Brian Parrish says, "Tobacco is ripening, and many growers are concerned about the availability of barn capacity. Wet conditions have  stressed  tobacco,  with
plants yellowing and wilting as Granville wilt sets in." In Granville County, N.C., "Flue-cured harvest is still running pretty slow due to wet field conditions and the fact that the plants are still pretty green, says Paul Westfall, County Extension agent. In the northern N.C. Piedmont, Hester Vernon of Milton (near Danville, Va.) says his flue-cured looks very good. He grows burley also and that looks good too. "We are harvesting now," he says...In Virginia, about a quarter of the flue-cured crop had been harvested by August 25, according to the NASS, compared to the five-year average of 33 percent.

A late but good crop in S.C.: In South Carolina, Kyle Daniel, Extension agent in Georgetown County, said in the USDA Crop Progress Report dated August 25, "Tobacco producers are working hard to get this crop finished up by the end of next week. The crop is much later than normal but it is a good crop." The report said tobacco harvest statewide was 88 percent complete by the 25th, which is somewhat ahead of the five-year average. In Georgia, according to the same report, only 63 percent of the crop had been harvested, less than the five-year average of 69 percent.

Roughly 50 percent of Kentucky burley has been harvested, say Bob Pearce, Kentucky Extension tobacco specialist. "We are just a little behind schedule. We have had challenges with the weather getting it harvested. In some cases mud has been splashed upon the leaves. Not much has been cured yet." He expects issues with houseburn. "It has been wetter than normal,"he says.

Blue mold has appeared on burley in eastern Kentucky, eastern Tennessee and southwestern Virginia and on shade and broadleaf tobacco in Massachusetts and Connecticut. Burley Extension specialists recommend that if you haven't topped yet or have just topped, consider a fungicidal spray.

In southwest Virginia, Danny Peek, Virginia District Extension director in Abingdon, says burley harvest is going full speed now. "Overall, the Virginia burley crop looks really good. We have had enough rain to keep the crop growing. Some areas have received a lot of rain, and there has been some bacterial hollow stalk as a result. This crop should weigh good if we can get it in the barn. But we have a labor shortage, and farmers are nervous about finishing barning in a timely manner." It had been feared back in the spring that there wouldn't be enough plants. It looked like there would be a shortage, but everyone seems to have gotten what they needed, and the plants were of good quality.

Some late-planted burley in east Tennessee hasn't been topped yet either, says Eric Walker, Extension tobacco specialist. But this tobacco is coming along well, he says. In Macon County, near Nashville, harvest is about 40 percent complete. The dark crop is much farther along, and Walker has visited one dark farm which will be taking down its first crop soon, perhaps this week...A hail storm two weeks ago in east Tennessee badly damaged the burley at the Research and Education Center in Greeneville, Tn. Rob Ellis, center director, says the hall was spotty and may not have done too much damage in the big burley producing county of Greene. "My feeling is that overall the tobacco in this area is average to above average."

A new manager: The Burley Stabilization Corporation has appointed Craig Easterly, a veteran tobacco buyer, as Greenville, Tn., area manager, responding to increased activity at the cooperative's receiving station there.

I hope you have enjoyed Tobacco Farmer Newsletter. If you haven't signed on to receive it regularly or need to change an address, please click on "Join our mailing list" and follow the prompts.