WHY SO MANY FEEL SO OPTIMISTIC ABOUT 2013

A bright outlook for the short term had everybody happy at the recent meeting of the Tobacco Growers Association of N.C. From left, association president Brent Leggett, speaker Blake Brown of N.C. State, and association executive vice president Graham Boyd.

The outlook was bright at the Southern Farm Show in Raleigh, N.C., and the annual meeting of the Tobacco Growers Association of North Carolina [TGANC] which took place on the show's last day. "I am not sure I can remember a year in the last 20 where we had the optimism among farmers that we have this year," N.C. Extension economist Blake Brown told the growers association meeting. Cause for all the cheer? Production for the type was a healthy 473 million pounds in 2012, and the average price--at about $2 a pound--was the highest it's been since before the buyout.
Demand looks good for 2013, but will flue-cured growers be able to meet  it? TGANC president Brent Leggett, a flue-cured grower from Nashville, N.C., told his members that any grower with a reputation for producing quality leaf seemed able to sign contracts for as much as he wanted, sometimes for more than he can reasonably expect to produce. But not all those contracts were getting signed because alternatives crops wee in some cases more appealing. "Tobacco continues to find itself fighting for acres," said Leggett. "As long as alternative crops prices hover at all-time high levels--[plus] labor and social concerns--and as long as tobacco continues to creep upward in costs of production and increased exposure concerns, every grower will agonize over exactly how much to plant." So while there may be more than 500 million pounds of demand for flue-cured, Leggett openly doubted that flue-cured production would exceed 480 million pounds, barring exceptional weather.

Will there be enough plants to go around? Charles Tart of Dunn, N.C., sells greenhouse transplants with capacity to supply 700 acres. "We are booked solid already," Tart said. "If I had three more greenhouses, I could have booked them too."

Is tobacco becoming politically acceptable once again as an economic force in the Tar Heel state? One positive indication might be that the governor of North Carolina addressed the N.C. growers association meeting for the first time in more than 10 years. The new N.C. governor, Pat McCrory (right), said agriculture will be the segment of the economy that helps get N.C. out of the current recession. "The tobacco growers are going to lead the way for us," said McCrory. He plans to help. "When I go on international trips, one of the first things I'm going to mention is tobacco exports," he said.
It was a good show for equipment manufacturers. "This show has certainly been the best of the four farm shows I have attended," said Eric Scaion, president of World Tobacco Inc., a curing barn manufacturer in Wilson, N.C. Afterward, he added, "I have a good feeling for this year. The coming season could be the best for our company"...Bob Pope of Long Barns in Tarboro, N.C., said his company sold some barns at the show and had some serious inquiries as well. "Farmers are not beating our doors down, but sales are better this year than they have been." Long is still taking orders but there is some urgency for getting your order in, he said. "We can take orders for new bulk barns as late as April."

Bringing the infrastructure back up to date. The farmers who visited the Cureco® Inc. exhibit at the show seemed to be excited about 2013, said Mack Grady and Galen Creel. "We have received a very good reception," said Grady, whose company manufacturers the Cureco automatic tobacco barn temperature and humidity controls. "We have more orders than usual for this time of year." The controls were going primarily into existing barns, Creel said. "But we are also receiving orders from farmers who are buying new barns. These will be installed when the new barns are delivered to the farm. The update of the tobacco infrastructure has begun." Fuel savings, time management because of less time spent adjusting barn conditions and better quality tobacco are the main benefits of automatic curing controls, said Grady. The ability to monitor barns via Internet is another advantage. Anyone who buys controls from Cureco will get professional installation, service and technical support from the Cureco team. [Editor's note:  In the January issue I reported that one can buy Cureco controls built into a new barn at the factory.  I have been reliably informed that the only way to get a real Cureco control is to purchase directly from Cureco Inc. at 252-569-1714.]

World burley production headed up: Higher global prices--reflecting the depleted level of non-committed stocks-are expected to lead to a more than 20 percent increase in world burley production in 2013 as Africa and South America rebound, said Will Snell, Kentucky Extension economist, in the recent Kentucky Agricultural Economic Outlook for 2013. "If labor issues can be addressed, price incentives provided, and a decent growing/curing season evolves, market conditions may enable the Kentucky tobacco industry to approach $400 million in sales for the 2013 crop," said Snell. 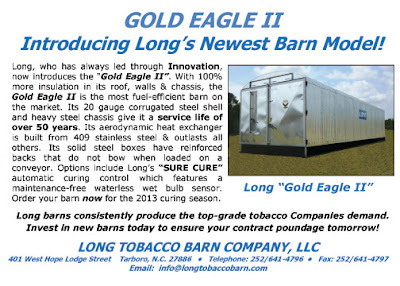