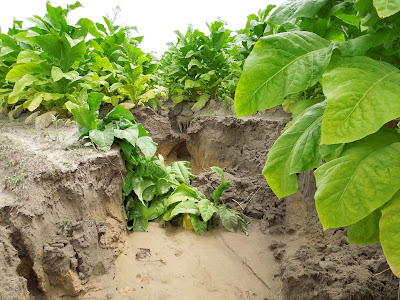 Gullies like this resulted in many Florida tobacco fields after torrential rains associated with Tropical Storm Debby drenched the area on June 26 and the days leading up to it. The farm shown above is near the town of Lake City. But the Georgia-Florida Extension agronomist said on Thursday that the damage was not as extensive as he expected. The storm crossed north Florida starting June 26, dumped 16 inches on the major tobacco towns of Live Oak and Lake City, then left land via Jacksonville on June 27 heading to the Atlantic, never having strayed in the northern or southern tobacco areas of the state.


It is not as bad as expected, said specialist J. Michael Moore. “Farmers as far south as Gainesville and as far north as the Georgia state line have little damage and will have a pretty fair crop. But those in the Live Oak area will not be so lucky—there is lots of drowning there, and there will be scalding from the hot sun on Thursday, Friday and Saturday.” Drowning damage continues to be compounded by extreme temperatures and bright sunshine, Moore said Friday. “As roots are suffocated and plants lack the ability to take up water, nutrients and oxygen, wilted leaves are scaled and burn. Although losses are heavy and continue to become evident, a large portion of the Florida crop and a large majority of the Georgia crop is not damaged.”


Temperatures of above 100 degrees are predicted for Saturday, June 30.


Moore's assessment on July 11: "The damage is still mounting. Farmers are still working with insurance adjusters on at least 300 acres."