HOW MUCH TOBACCO DID YOU REALLY PRODUCE THIS YEAR? 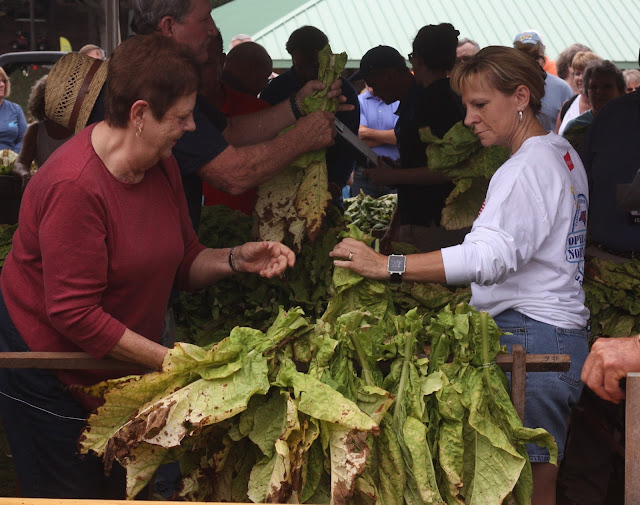 Contestants at the tobacco-tying contest at the N.C. State Fair show off their stringing ability. The wining team was the " Looping Fools" of Maple Hill (not shown). Team members Sandy and Ken Jones of Maple Hill and Michael Sunday of Holly Ridge looped their stick of tobacco in 51.67 seconds.

The last USDA production estimate for 2017 was issued earlier this month. It included extremely optimistic estimates for flue-cured, burley and the two dark types. But several normally reliable sources have suggested that the projections--especially for Kentucky burley and N.C. flue-cured--may be way too high. Take the USDA projections (following) for what they seem to be worth and I will try to get a more credible report in the next issue of Tobacco Farmer Newsletter about a week from now.

FIRE-CURED--57.9 million pounds, up 46.5 percent.
DARK AIR-CURED--19.44 million pounds, up 94 percent.
PENNSYLVANIA SEEDLEAF--4 million pounds, up four percent.
SOUTHERN MARYLAND--2.5 million pounds, no change.
In other tobacco news...
Flue-cured growers and many with a sentimental attachment to the type came to the North Carolina State Fair in Raleigh on October 13 to celebrate this year's crop. Flue-cured leaf was brought down from the nearby Oxford Research Station to provide the basic material for the fair's annual tobacco-tying contest. As the contestants tied their leaf on strings, several growers reviewed their experiences growing bright tobacco in 2017.

Hustling to finish harvest: Carl Watson, the tobacco research specialist responsible for growing the crop at the Oxford,  research station, said he expected that harvest on the station would continue until the end of thisweek. "That's quite late for us," he said. Several farmers north of the station are still harvesting too. I have seen some of them 'borrowing' barns from neighbors who are finished, to speed things up. But if we can avoid extremely cold weather, I think this crop will all get out of the field." It got dry during harvest, said Watson. "We were having a problem of bruising of the leaves. So, we quit harvesting for a time and watered again."
Good quality: Sam Crews of Oxford, N.C., said poundage was down on his farm. "But it was generally good quality. The top of the stalk looked good. I am sure this crop will fare well in foreign markets."
Lowerstalk short: Thomas Shaw of Henderson, N.C., north of Durham, said his crop was average. "The wet weather early was a problem, but we overcame that." Heat late in the season delayed harvest, and he finished October 11, late for his area. "We are a little short on pounds, due to the weather extremes. The heat early took its toll, leaving us a little short on lower stalk leaf. Then at harvest, some fields were too wet and some too dry.  Selling this crop has been a challenge."
Harvest of the Kentucky burley crop is probably complete by now, says Bob Pearce, Kentucky Extension tobacco specialist. "But some of it hasn't been in the barn long." Difficulty obtaining labor slowed harvest on some farms, and tropical storms slowed some others. "Still, we had a favorable stretch of weather to get the last of the crop in, and curing got off to a good start." Curing seems to be going fairly well for the first tobacco that was harvested early. But the later-harvested could face a problem if temperatures turn downward. "An average of 60 to 90 degrees is ideal for curing," says Pearce. "If it is lower, you run the risk of curing green."

Editor's Noter: I hope you have enjoyed the October II issue of Tobacco Farmer Newsletter. If you haven't signed on to receive the newsletter to your email address, or if you need to change an address, please call me at 919-789-4631 or email me at chrisbickers@gmail.com.--Chris Bickers
Posted by Chris Bickers at 10/27/2017 09:47:00 PM