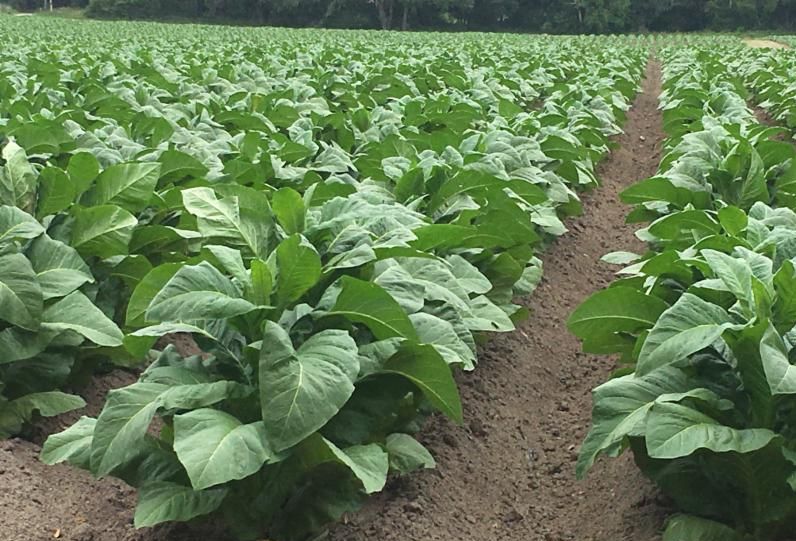 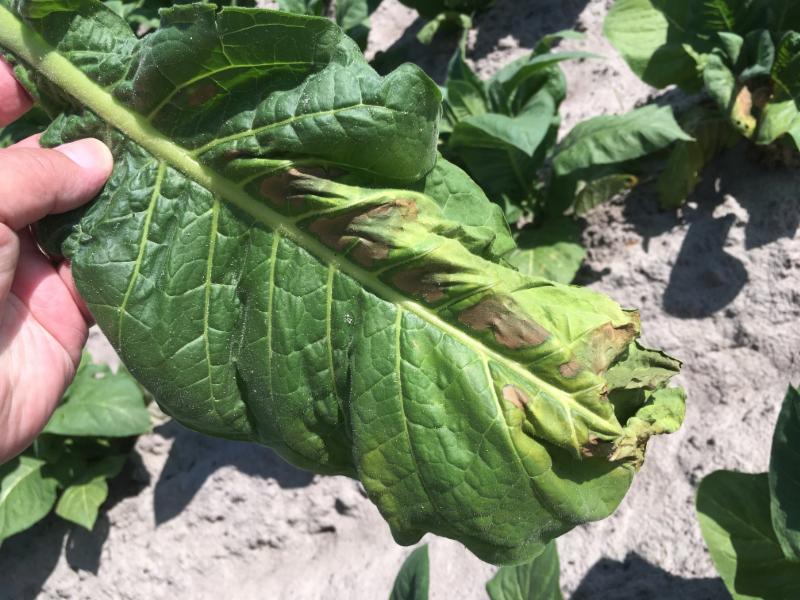 The flue-cured in the Deep South looked good
a week ago, as in this north Florida field
(above).But intense heat caused some
sun scald (right, in south Georgia)to
set in."About the only thing
to do about it is to irrigate to make sure soil
moisture meets the needs of the plants,"
says J. Michael Moore, Extension tobacco specialist.

A wave of 90-degree temperatures has struck tobacco in Georgia and Florida, and they are expected to continue for the rest of this week. They could slow the good start the crop had gotten, says J. Michael Moore, Georgia Extension tobacco specialist. "We had a beautiful crop a week ago, but now the soil moisture is beginning to be depleted." Farmers are seeing some sun scald. "About the only thing to do about it is to irrigate to make sure soil moisture meets the needs of the plants," Moore says.
When you cultivate in intense heat, try to disturb as little of the existing root system as you can, says Moore. There is a danger of breaking turgor, or aninterruption of the movement of water into the plant. Much of the Georgia crop will soon be ready for layby.
But Florida is farther along: At least one Floridi-an may be applying contact sucker control this week, Moore adds. "This farmer had planted the second week of March," he says.
On the bright side,  Geor-gia and Florida have suf-fered very low levels of tomato spotted wilt virus and low levels of budworm so far. "There have been no other appreciable insect or disease problems to this point," Moore says...Transplanting is complete in both states.
Reports from the field (from USDA Crop Progress and Condition surveys):
Editor's Note: A bit of hope. This may be wishful thinking, but I just can't help but think the trade war with China will be resolved by market opening. Both sides--but especially China--have too much to lose. Even if it is resolved, there is no telling if China would buy any of our leaf from this crop. But I feel like they would, since their go-to source of flue-cured, Zimbabwe, appears to have produced a short crop. The Chinese could go to Brazil, but I don't think they like the Brazili-an government any more than they like ours. Cigarette demand in the developed world, meanwhile, has continued to decline, but at a more or less predictable rate; I am not very good at numbers, but it seems to me that if China did come back on the U.S. market to any significant degree, there might not be any excess of tobacco to meet the resulting demand. If our leaf supplies are short but are of average or better quality, the market could be fairly strong. But a bumper crop and/or poor quality could scuttle that faint hope.