THE MYSTERY OF THIS TOBACCO MARKET: HOW MUCH U.S. LEAF WILL CHINA BUY? 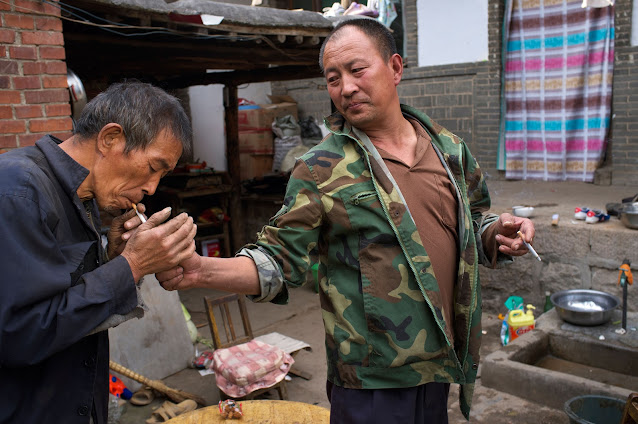 Sharing a light: Two Chinese farmers take a cigarette break in the North China province of Hebei. Photo by Alamy.
THIS JUST IN:

Princeton AREC takes a direct hit from tornado. The Kentucky Research and Education Center in Princeton, Ky., was seriously damaged when it took a direct hit from a tornado Friday night. As much as 90 percent of the facilities at the station appear to be destroyed or unusable, says Bob Pearce, Kentucky Extension tobacco specialist. The center has has been headquarters for dark tobacco research and Extension activities in Kentucky and Tennessee...There may well be tornado losses in barned tobacco on farms in the western Kentucky countryside, but it will be some time before that can be ascertained.

LEAD ARTICLE:
China is buying U.S. leaf again, making selections from the 2021 crop. It may buy more tobacco in 2022, but this is far from certain, says Blake Brown, N.C. Extension economist. “Relations between the United States and China are likely to remain strained,” Brown said at the recent N.C. State Tobacco Situation and Outlook webinar. “That is probably going to temper the Chinese appetite for U.S. products.” This may translate into some instability in sales to China. Potential problem: Most of the tobacco that China buys from the U.S. is bought by a state monopoly which is more sensitive to tensions between the U.S. and China than a commercial buyer would be.
Let’s not forget how U.S. flue-cured fared the last time a trade war affected U.S./China sales. Sales dropped to 238 million pounds, and the drop was entirely ascribed to the abandonment of our market by the departure of the Chinese buyers starting in the midst of the 2018 market and continuing through 2019 and 2020. They returned in 2021, and sales rebounded to 303 million pounds. Brown said a modest increase in contracted pounds may be possible in 2022.
Note: China bought about 60 millions pound from U.S.--or about 20 percent--in the most recent year. “So there is a bit of growth opportunity this year,” he says. But if we plan to sell to China, we should have a balanced portfolio and we should focus on countries other than China. We can always be optimistic. “It is still a growing tobacco market,” Brown says.
How to get through the current situation: Intense international competition coupled with concentration in the buying sector mean price growth at the farm level will be limited in the future, wrote Will Snell, Kentucky Extension agricultural economist, earlier in the year. “To survive, U.S. growers must be willing to
“Improvements in labor efficiency, optimal input usage, and boosting yields will be critical to remain profitable,” he added.
Three burley auctions have taken place so far, all at the Farmers Warehouse near Springfield, Ky. (formerly Danville) in the Bluegrass. "Our first sale averaged $1.87, our second averaged $1.92 and the one last week averaged nearly $1.90," says Jerry Rankin, owner of Farmers Warehouse. "We have another coming up Tuesday, and we have some good tobacco on the floor for that." The highest price he has seen so far was $2.02...The quality of this burley crop has been very good, he says, but he continues to fear that the volume will be extremely short.
Deadline approaching: By January 11, members of the Burley Tobacco Growers Cooperative Association must submit amended materials that document that they are members of the settlement class in the legal action that is ending the cooperative. Note: If you are one of those members, BTGCA sent notices on November 12, so if you didn’t get a notice, don’t worry about it. But if you did, the clock is ticking. For information, please see the Important Documents page on the BTGCA website.
When does federal crop insurance end for a particular crop? Answer: With the earliest occurrence of one of the following (according to USDA-RMA):
﻿N.C. growers approved once again their 30 year old assessment providing funding for the tobacco related research and Extension efforts of NCSU’s College of Agriculture and Life Sciences. This year’s vote, which provides for a 10 cents per 100 pounds checkoff on each pound of flue-cured and burley tobacco sold, continues the assessment through 2027.
In passing: Marion Hawkins Jr., founder of GoldLeaf Seed Co. passed away in November. He was a real visionary in the breeding of flue-cured. Good-bye to a True Tobacco Great.
Posted by Chris Bickers at 12/11/2021 09:59:00 PM